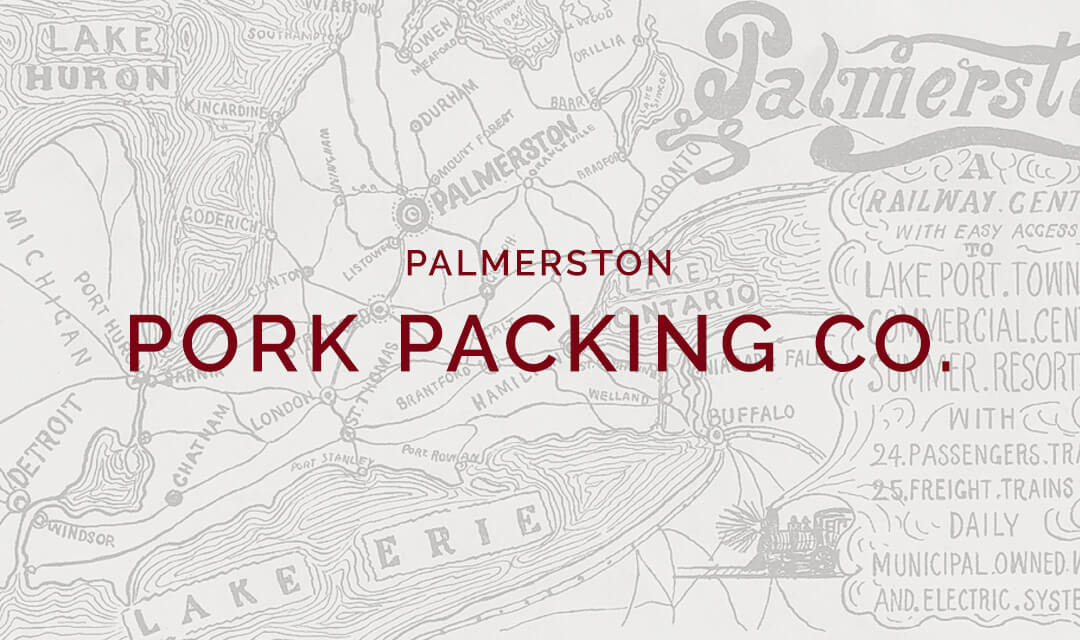 From a 1907 “Trade Edition” of the Palmerston Spectator:

The largest manufacturing firm in town, giving employment to over 50 men, is the Pork Packing Factory. It is one of the largest packing houses in Canada and the people of Palmerston have every reason to be proud of it.

My first impression on visiting the plant was of the cleanliness of everything. The plant was processing 300 hogs per hour and the process was continuous, every man having his own particular work. The hogs are driven up out of the pens from the ground to the third storey. Here they are executed and attached to an endless chain driven by machinery

I next went to the coolers, or chilling rooms, where the hogs are hung. These are furnished with cool air by an immense ice machine which is of a capacity equal to the melting of 48 tons of ice per day. The cutting rooms, where the pigs are cut into the several cuts suitable for the home and export markets, I next visited. This contained a table, the top of which was made of rollers. The hogs are cut at the rate of one hundred per hour and salted by another gang of men in bacon cellars at the same time.

Well, the bacon cellars were as wonderful as the killing department. Here I saw literally thousands and thousands of hogs. In the several stages of curing. Hogs of all sizes and descriptions, for every market. Hams for France and South Africa, long “Wiltshire” sides for England, “Cumberland” cut, long rib and “Dublin” cut for Ireland, etc. I next found my way to the lard rooms. The lard is cooked in immense boilers, which have about ten tons capacity. It boils in these for 5 or 6 hours, when it Is drawn off into copper-lined receptacles. It is then pumped through a filter press, air-dried, cooled and filled into tubs, pails and tins. I next paid a visit to the engine room and the machinery is the latest and the best. It consists of 2 machines, one 85 horsepower and 95 horsepower.

While I was on the premises the sausage foreman was busy turning out two tons of sausages and on the previous day he made more than the same amount of bologna. Cooked hams are his specialty.

The factory was built in 1899 by a co-operative.