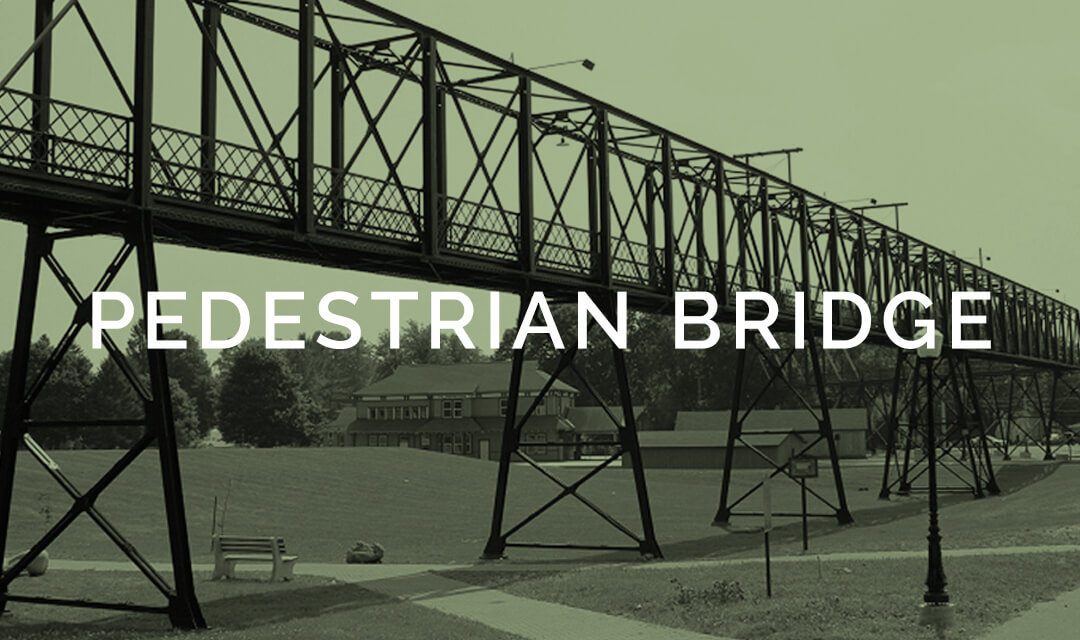 The Pedestrian Bridge is considered Palmerston’s most unique and treasured landmark. During the railroad’s peak in Palmerston, the Grand Trunk had expanded the number of tracks in its yard to accommodate up to 40 trains a day. It became very tricky to pass over such a large number of tracks without some inherent dangers present. To minimize the danger for pedestrians, the Grand Truck Railway began building the Pedestrian Bridge in 1910 which was finished by 1912. This bridge allowed people to safely cross the train tracks and was often used by children walking to school.

It still maintains a prominent position within the community, and has been integrated into the Lions Club Heritage Park, which is also home to the swimming pool and Old 81.

The Re-Opening of the Pedestrian Bridge

During the Summer of 2008, the pedestrian bridge in Palmerston had been closed off, much to the dismay of the Town’s people and visitors. It had been closed down due to the need of restoration. It was re-opened on October 3, 2008 with a special ceremony to recognize the community’s heritage. Students from Palmerston Public and Norwell District Secondary schools were in attendance, which had seemed fitting, as they were the reason behind the bridge’s existence. Palmerston’s local historian, Bob McEachern, provided a speech detailing the history of Palmerston and the Bridge. He explained that Palmerston is unique in Wellington County as the railway had existed before the Town. Elsewhere, the towns had been established long before the railways came into being, which resulted in the railway stations and yards being located on the outskirts of town. Palmerston, however, had their station and rail yard located in the centre of the town, as the Town built up around it. In the early days, a decision had been made to build the school on one side of the tracks even though the residential area was on the other side. As a result all of the railway traffic had to stop to accommodate students travelling back and forth to school in the morning and afternoon. This resulted in the bridge being constructed in 1912, which has since been noted as the longest bridge of its kind in Ontario.

Mayor David Anderson provided a few words of the bridge’s history, and as well explained its need of repair. As holes were appearing, the structure had been deemed unsafe, and had been closed down due to insurance liability. The cost of fixing the bridge was quite huge, as Anderson stated the town was unable to pay for it without some help. Anderson stated that Perth-Wellington MPP John Wilkinson came to the rescue by helping the municipality secure provincial funds, which will allow the bridge to stay in the community for another 75 years.

The idea for its restoration was to make it walkable again and to have it highlight the parkland redevelopment underway on the former railway lands. Wilkinson presented the community with a plaque, while telling the students that among the things that make local communities so wonderful are the unique things we can be proud of. That is what heritage is about. They are the things our parents, grandparents and great-grandparents built and we are so proud of them, and we want to keep them. Wilkinson believes that the bridge will become a drawing card to attract people to Palmerston. He also thanked the volunteers within the community who had the vision to transform the park, as many would have demolished it and turned it to other use.